Lord Shiva had a seat reserved for Him for the first time ever on a train, the Kashi Mahakal Express that links three Jyotirlingas in two states and was flagged off by Prime Minister Narendra Modi on Sunday from Varanasi.

After embarking upon the novel idea, the Railways authorities were further mulling if they should make a reserved seat for the “Bhole Baba” a permanent feature of the train, which will connect three Jyotirlingas — Omkareshwar near Indore, Mahakaleshwar in Ujjain and Kashi Vishwanath in Varanasi.

Seat number 64 in coach B5 was reserved and left vacant for the deity.

The national transporter launched its third IRCTC-operated service, the PSU’s third corporate train, from Uttar Pradesh’s Varanasi to Indore in Madhya Pradesh and has named it Kashi Mahakal Express.

Take a look at the newly inaugurated Kashi Mahakal Express, with its clean & hygienic pantry for providing high quality vegetarian food to passengers.

Also, facilities such as bedrolls, houskeeping and travel insurance is going to make the journey convenient & pleasant for all. pic.twitter.com/KbTkxSQ8rK

Light devotional music, two dedicated private guards in every coach and only vegetarian meals will be some of the new features of the fully 3-AC service that will run thrice a week between Varanasi and Indore.

Kashi Mahakal Express train will operate thrice a week between Varanasi and Indore, once via Prayagraj (Allahabad) and twice via Lucknow. The route of the train will be via Sultanpur – Lucknow or Prayagraj – Kanpur – Jhansi – Bina – Sant Hiradnagar – Ujjain – Indore and back.

Here is the information about routes, timings and days of operation of Kashi Mahakal Express. 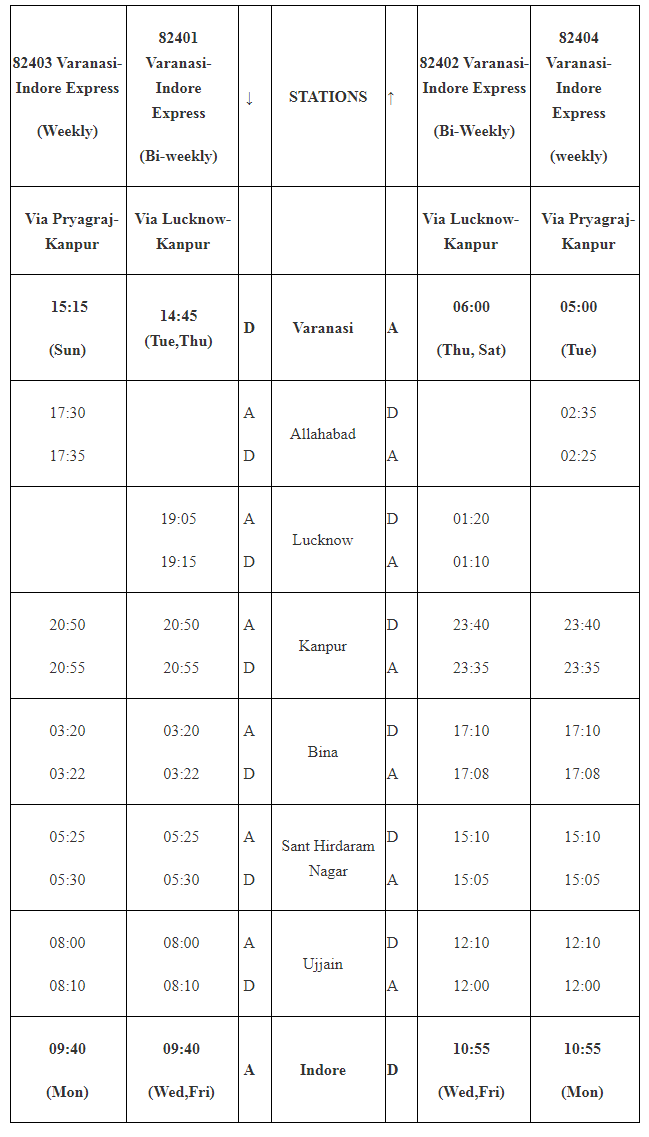 Kashi Mahakal Express will be the first passenger train of its own kind which promises to be a full-service overnight journey train with high levels of onboard services complemented with exclusive optional tour packages for the passengers covering the religious, business as well as tourism sites of the states of Uttar Pradesh and Madhya Pradesh.

How to book Kashi Mahakal Express